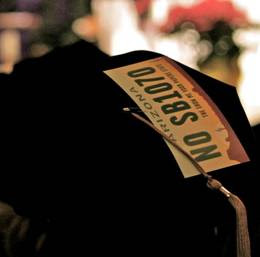 Ever since the Federal government failed to enact laws bringing immigration reform to the country, States have increasingly decided to take this matter into their own hands. The National Conference of State Legislatures (NCSL) reported that in 2010 State legislators from 46 different states and the District of Columbia introduced more than 1,400 bills and resolutions relating to state immigration issues. A detailed description on the types of laws introduced and/or passed can be found here: http://www.ncsl.org/default.aspx?tabid=21857.

The most controversial adoption of state immigration law occurred last April in the state of Arizona. Arizona adopted Senate Bill 1070 which, among other changes, makes it a misdemeanor to not carry papers showing immigration status, and allows police officers to detain individuals reasonably suspected of being in the country without proper authorization. Although most hoped that what happened in Arizona would stay in Arizona, the bill is influencing other states to take action. Illinois, Michigan, Minnesota, South Carolina, Pennsylvania, and Rhode Island attempted to pass similar bills, however none were enacted into law.

However, not all state action has followed the Arizona-style. In fact, the state of Utah recently passed legislation creating a state guest-worker program, which would allow undocumented immigrants to work legally in the state by paying fines of up to $2,500 and passing a criminal background check. This law will need a federal waiver and if received will take effect in two years. Utah legislators removed provisions similar to that of Arizona SB 1070, but included requirements that police officers verify the immigration status of individuals stopped or detained for crimes. Utah, New Mexico, and Washington are the few states left allowing undocumented immigrants to obtain driver’s licenses.
Posted by Mitchell Zwaik at 11:49 AM