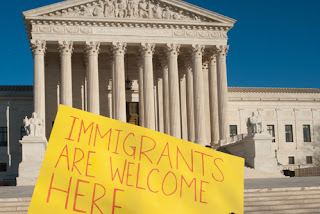 {1:24 minutes to read} The December 4, 2017, decision by the U.S. Supreme Court to allow the Trump administration’s temporary travel ban, was a significant victory for the administration. The current, modified version, restricts nonimmigrant and immigrant entry for citizens or nationals of eight countries:

•Yemen.
The administration previously issued travel restrictions for nationals from six Muslim-majority countries. The current Executive Order removes Sudan from the previous list and adds North Korea, Venezuela, and Chad.
The administration argued before the court that the current ban was not a reflection of anti-Muslim bias because it included Muslim and non-Muslim countries as well.
And then the President celebrated his victory by re-tweeting a vile, universally discredited anti-Muslim attack that had been initially posted by a British neo-Nazi group. And rounded out the week by recognizing Jerusalem as the capital of Israel against the advice of his top advisors.
It was not a week to make Muslims feel welcome in the U.S. — at a time when we need the cooperation of Muslim countries to continue to fight back against terrorist attacks.
Mitchell C. Zwaik